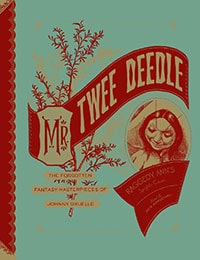 Mr. Twee Deedle, Johnny Gruelle''s masterpiece, unjustly forgotten by history and never before reprinted since its first appearance in America''s newspapers from 1911 to 1914. The title character in the Sunday color page, Mr. Twee Deedle, is a magical wood sprite who befriends the strip''s two human children, Dickie and Dolly. Gruelle depicted a charming, fantastical child''s world, filled with light whimsy and outlandish surrealism. The artwork is among the most stunning ever to grace an Amercian newspaper page, and Gruelle''s painterly color makes every page look like it was created on a canvas. Mr. Twee Deedle stands as a bizarre time-warp: at a time when most children''s literature and kids'' comic strips were somewhat violent or starkly moralistic (the Brothers Grimm; the Katzenjammer Kids; and even Little Nemo itself, which often depicted nightmares, fears, and dangers), Twee Deedle was sensitive and whimsical. Instead of stark moralizing, it presented gentle lessons. It reads today like a work for the 21st century… indeed for all times, all ages.